Norway, "The Land of Vikings, and the Midnight Sun," is the northernmost country in Europe. It is a ruggedly beautiful country of mountains, fjords and glaciers. 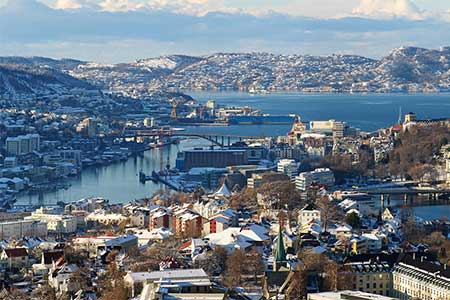 This Scandinavian country has just come onto the bucket list of some Indian international travellers with around 16,000 of them opting to visit this North European country last year. As more travellers will look for different experiences, countries like Norway will continue to see growth in the Indian visitors.

Norway is a Nordic country in Northern Europe whose territory comprises the western and northernmost portion of the Scandinavian Peninsula; the remote island of Jan Mayen and the archipelago of Svalbard are also part of the Kingdom of Norway. Norway also lays claim to a section of Antarctica known as Queen Maud Land. The country covers an area of around 3.85 lac sq kms and has a population of around 5.3 million with Oslo as its most populous and capital city.

There are a large number of languages spoken in Norway. Of these, the Norwegian language is the most widely spoken and the main official language of the country.

Visa for Norway from India

Norway visa requirements for Indian citizens / Currency (please note these procedures / exchange rates can changed from time to time…please get an update from the embassy prior to travel) As Indiais not part of the Schengen Area, if one is an Indian passport holder you will need to apply for the appropriate type of Schengen Norway Visa for travelling to the country. To be eligible for a Schengen Visa for Norway one will mainly need their current passport, along with certain documents, to be submitted with the Visa application form.

Things You Must Do in Norway

Norwegian cuisine in its traditional form is based largely on the raw materials readily available in Norway and its mountains, wilderness, and coast. It differs in many respects from its continental counterparts with a stronger focus on game and fish. Many of the traditional dishes are results of using conserved materials, with respect to the long winters.

One must sample the following Norwegian dishes :

Since Norway is a country which is part of the Schengen countries in Europe, It is compulsory for Indian tourist applying for Schengen visa for Norway to buy adequate travel medical insurance in India satisfying the Schengen visa requirements.

Indian Travel medical insurance for Norway is relatively cheaper when compared to destinations in Americas, and most insurance companies offer a specific Schengen Insurance Plan. One must ensure that the minimum Accident & Sickness (A&S) sum insured for a Schengen plan must be €30,000 (around $50,000), and a visa to visit any Schengen country will not be provided without this minimum coverage.

The Sognefjord or Sognefjorden, nicknamed the King of the Fjords, is the largest and deepest fjord in Norway. Located in Sogn og Fjordane county in Western Norway, it stretches 205 kilometres inland from the ocean to the small village of Skjolden in the municipality of Luster.

Preikestolen or Prekestolen is a famous tourist attraction in the municipality of Forsand in Rogaland county, Norway. Preikestolen is a steep cliff which rises 604 metres above the Lysefjorden. Atop the cliff, there is an almost flat top of approximately 25 by 25 metres.

Nidaros Cathedral is a Church of Norway cathedral located in the city of Trondheim in Trøndelag county, Norway. Nidaros Cathedral is the world’s northernmost gothic cathedral. Built from 1070 over the tomb of St. Olav, the Viking king who brought Christianity to Norway.

Jostedal Glacier is the largest glacier in continental Europe. It is situated in Sogn og Fjordane county in Western Norway. Jostedalsbreen lies in the municipalities of Luster, Sogndal, Jølster, and Stryn. The highest peak in the area is Lodalskåpa at a height of 2083 m.


Some insurers offer a plain Accident & Sickness coverage for 30,000 Euros, which is the minimum requirement for obtaining a visa.

The customer support team at eIndiaInsurance will provide you all support required to buy your preferred insurance plan.

Complete a simple online application to compare plans and buy your chosen plan at the guaranteed best price on eIndiaInsurance.

Get quotes for India travel insurance! How to use Indian visitor insurance in case of sudden sickness and accidents... Click here to read more

You can buy insurance online by using a credit/debit card, direct funds transfer using NEFT or RTGS or by using a cheque.

How are Claims settled?

Are travel insurance directly billed or is it reimbursement basis, is there a hospital network.